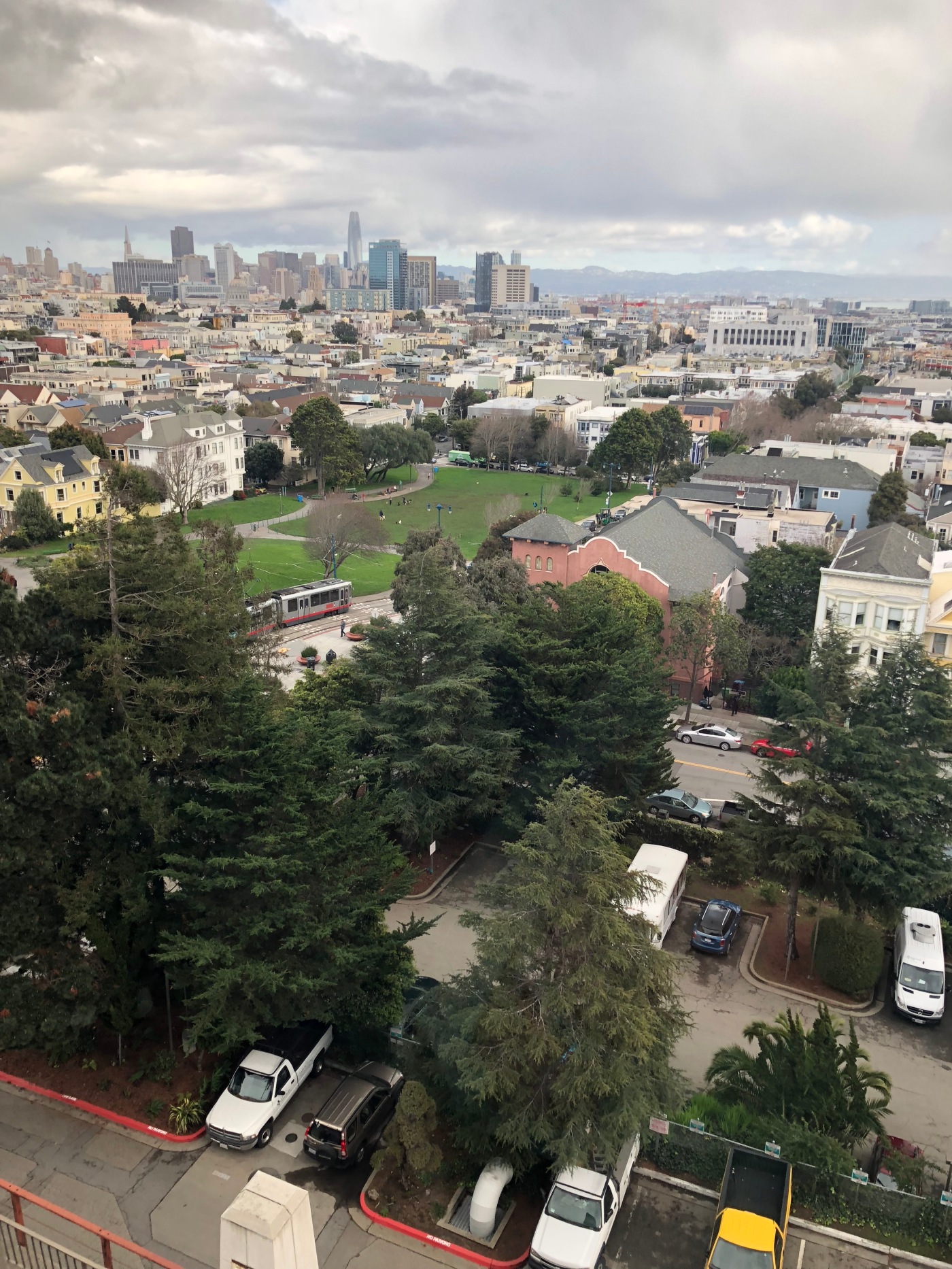 It’s a little over two weeks since my surgery, and I am here to report that it was a cinch! I had a DIEP Flap Reconstruction procedure, which involves replacing the breast removed in a mastectomy with a chunk of fat from the belly. Which also involves cutting through the muscles to remove blood vessels in the abdomen and transplant them into the breast.

Okay, call me a weirdo, but I almost find surgery fun. I will admit that when I walked into the hospital that morning, to the pre-surgical ward, and saw all the medical equipment, I had a brief moment of considering passing out. Or at least turning around and leaving. When I was wheeled into the actual operating room, however, I was fascinated. There were lots of people bustling around in there, and they were all sooo nice. It was a beautiful room, really, and the lights over the operating table were gorgeous! They were playing music, and asked if I had any requests. Then they put me on the table, put an IV in, and I was gone. It’s like magic.

I’ve mentioned before that my doctor, David Chang at Kind & Chang in San Francisco, is a whiz at pain relief. My breast cancer surgeon told me that when he does implants he gives you a shot of botulism in the breast muscle to keep it from spasming, to reduce the pain. After surgery, I woke up with a little golden ball attached to me which was filled with a local anesthetic, which dripped into my abdominal incision for about three days. I also had a pump with dilaudid in it, and a button that lit up whenever I was able to get another dose. My husband kept telling me, “The light is on,” and if I didn’t press it he would. But I really didn’t feel the need for it. When the nurses came in and asked for my pain level on that 1-10 scale, my answer was generally 1. I was really, really surprised AND happy about this! When I did push that button, it was more likely because I wanted to relax and get some sleep.

The hospital experience was less than ideal, and the worst of the ordeal was not the surgery but things around the surgery. I’d had the flu a few weeks before surgery and still had a residual cough, which may have been irritated a little more by the tubes in my lungs during surgery. At any rate, coughing after abdominal surgery is a challenge. So I asked for something for my cough. At the hospital where I had my surgery, they have “hospitalists,” which are doctors who are supposed to take care of your non-surgical medical needs. I had two while there, a woman I liked and a man who was a pain in the butt. He would not allow me to take my regular diabetes medication (metformin). I had discussed this with my endocrinologist and she had told me that the protocol had changed and that now they were supposed to give it to me. He came up with some excuse that my creatinine level was too high or too low, but when I got around to asking what my creatinine was, it was well within the normal range, and right where my previous levels had been.

But worst of all was his reaction to my request for cough medicine. I had run a post-op fever for a couple of days, which my surgeon said was normal, and because of that he decided to test me for the flu, AND isolate me! I told him I’d just HAD the flu, but no matter. The quick flu test came back negative, of course, but he still wouldn’t lift the isolation until the second test was completed. In the meanwhile, people came into my room wearing masks and even plastic face masks in the case of the phlebotomist. They even wanted my husband to wear a mask when he visited. The food service would not bring the food into my room. They also didn’t knock or inform anybody that it was there, so it just sat out in the hallway getting cold and nastier than it regularly was. (I’m not that picky, but the food there was BAD!)

I couldn’t sleep or eat in the hospital. I was feeling nauseous, and even with zofran a few bites of food would send my stomach roiling. They finally started bringing me Boost shakes with my meals. And as for sleeping, I could not find a comfortable position. I kept feeling as though I was going to suffocate when I tried to sleep on my back. So I spent most of the nights sleeping sitting up in a chair — which was not a recliner, and was not comfortable.

But on the good side, I had a big room, with an absolutely gorgeous view of San Francisco, shown in the photo above and below.

I was happy finally to go home, and recovery has progressed rapidly since then. I had surgery on both breasts, and honestly I can’t feel anything at all and the stitches appear to be pretty well healed. The abdominal incision is a little more challenging, and I have to wear a “binder” for six weeks, which is kind of a pain, sometimes itchy, but honestly makes me feel more secure. I started out with four surgical drains, and I still have one, which has stayed a week longer than it is expected to stay already. This concerns me because when I had my mastectomy I had one drain for eight weeks, and then they pulled it before it was ready because I really needed to start chemotherapy. Those drains are gross and annoying, and they make everything more complicated, like dressing and showering.

The best thing of all is that I do not have to wear a bra! I told my doctor I wanted small boobs and so now I have reasonably small boobs, no sagging! I can’t tell you how happy that makes me!

I have been told I will need some additional “clean up” surgery in three months. That completely derails my plans, but I just sighed and thought, “Well, I guess there is something else I am supposed to be doing.” It is, however, an outpatient procedure, with two weeks recovery time, and honestly as long as you don’t want me to lift heavy objects, two weeks after this complex surgery I am able to do pretty much anything.

I don’t know if I am unusual when it comes to surgery. It isn’t that I have a high pain tolerance, because I don’t. Give me a slight headache or a back ache or most anything else and I am whining and running for the Motrin. But this is my fifth surgery now, and I just have not experienced the pain I would have expected. So if you happen to be facing surgery for any reason, perhaps you can take some encouragement.

So there are my adventures in Surgery Land.

I wanted to mention also that I am participating in a Breast Cancer Trial. It’s called the BWEL study, and it focuses on weight loss. It is known that women who are leaner at the time of diagnosis with cancer have less chance of a reoccurrence. The purpose of this study is to determine if becoming leaner after cancer has the same protective benefit. It basically involves a 1200-1500 calorie a day diet, tracking foods on an internet program, and wearing a Fitbit to record activity. I can’t tell you how thankful I have been for this program. I have lost close to 20 pounds. I have reached the point a couple of times where had I been doing this on my own I would have likely tossed it and gone back to eating whatever I want. But participating in the study, knowing I would have a meeting with my counselor (by phone) at the end of the week, has made it far easier to stay with the program. That is, of course, in addition to the motivation of first of all not wanting to get cancer, and secondly, after having parts of my body reshaped by surgery, I want to bring the rest of it in line also. And I want to feel good. I don’t want to feel like a bloated slug. So I am happy and thankful for this program, and hope to be successful not only at achieving the goal of becoming leaner, but at helping to prove that this does, indeed, help to prevent a reoccurrence of cancer. My surgeon had offered to remove my chemo port while he was doing everything else, but my oncologist said no, he wanted it left it. “Your cancer was very bad and I don’t know when it will come back,” he tells me. Part of this is a language issue, since English is not his first language, and I recognize that. However, it is still kind of an unfortunate way of putting it. Or perhaps not unfortunate. Perhaps it is fortunate, because it makes me take things seriously, and to be willing to put in the effort required to be healthy and stay healthy.

I am in the final steps on my journey through Cancer Land, and I want them to remain final. No revisiting. Onward and upward!

4 thoughts on “I survived the surgery!”

I love the introductory video they show you when you sign up as an artist on Patreon. It points out what a wonderful time we are living in, where artists of all types are free to create and to share their creations with the entire world through the internet and other modern technology. Remember back in the old days, when there were just a few stars in each area of the arts, and you would have to travel to a store and buy their music or writing or artwork if you wanted to enjoy it? Now instead of a few stars there are massive constellations of artists out there, sharing their art on the internet. The only problem, the video goes on to point out, is that nobody is getting paid for it! There are still those few stars making megabucks, and then there are the throngs of writers and musicians, artists and filmmakers, who are just giving it away.

As a writer, my real purpose is to share something meaningful with the world. Perhaps one day I will finish one or both of the books I have in progress, and someone will want to pay me money to publish them. But honestly, I would be just as happy to continue to just share it through the internet, and through self publishing venues that are one of the other blessings available today, if forums such as Patreon can provide the support that my family needs.

I have a couple of levels of thank yous to those who support me on Patreon. At the $10 a month level, I will send a personal thank you, with some items which might include personalized pens, pins, bumper stickers, depending on what I have on hand at the time.

At the $25 a month level, I will send you drafts of the chapters of the book I am working on and give you an opportunity to comment and make suggestions, and will also send you a personally signed copy of any books I may publish, including the child safety book I published a few years ago.

Thank you, thank you so much. For more information, or to make a pledge, please visit Patreon.com/sharonmurch.

And never forget, you are loved.