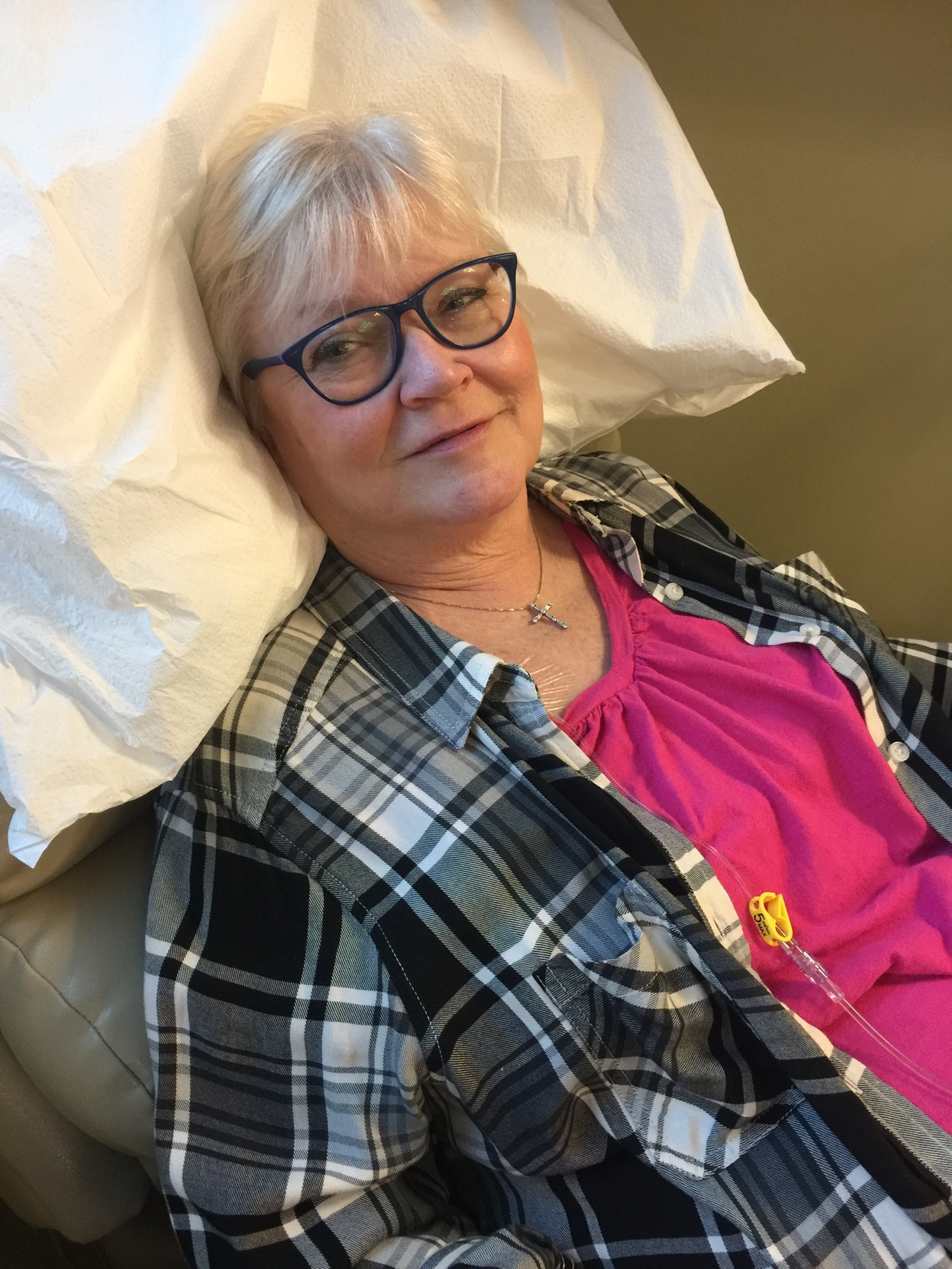 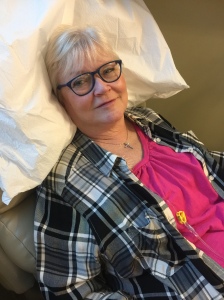 They finally got me into that chair for my first day of chemo today. It wasn’t itself unpleasant. The people who work at Epic Care in Castro Valley are so nice, they of course made it easy. It took a long time, four hours total! I got very tired and could have slept through a lot of it, but my husband and daughter were with me so I pretty much stayed awake. My husband brought me an iced almond latte from Starbucks, which revived me slightly but still left me half in dreamland.

I came home and slept a nice, deep sleep for awhile, and woke up feeling pretty good. No big surprise since the first half of the chemo was devoted to pumping me full of stuff to make me feel good. I got one three-day anti-nausea medicine, one day’s worth of Zofran, another antinausea medicine which I will take in pill form after today, and a good dose of Decadron, a steroid that is supposed to prevent nausea and other side effects of chemo. Both my oncologist and my endocrinologist have told me that decadron is likely to raise my blood sugar, and that even though I have never taken it before, I might have to use insulin while doing chemo. I am sending my blood sugars to my endocrinologist daily so she can keep tabs on it.

I have been checking my blood sugar since I got home, and while it is higher than normal, it hasn’t become outrageous yet. But I haven’t eaten much either. I don’t really have much of an appetite right now anyway, at least not for healthy foods. The desire factor could cause me to eat all sorts of things that would be all bad, so maybe it’s a good thing I have to keep an eye on my blood sugar.

I am feeling a tiny bit better about the immune suppression factor since the chemo. The chemo tech was telling me it is best not to eat at salad bars, and I said that they told me not to eat salad at all. She said that is really only true when my white blood cell count is down. Now the tricky thing is figuring out when that is true, which is perhaps why there was just a blanket “no” to these things. They don’t make home white blood cell count test strips or anything! I get this checked once a week, and in between times I have no idea what my white blood cells are doing! The tech said that if my white blood cell count was going down I would know because I would start getting really tired. I said, “I think my white blood cell count is going down now.” This was me being funny of course, because I knew it was too early for that to be happening. But it was also me making a point. She said I’d know the difference, so we will wait and see. That would be a pretty clever built-in design mechanism, though, that if you are susceptibe to infection you become too tired to go out and get infected!

I also get spiffy meds to help keep my white blood cell count up. I have a little injection bot of Neulasta plastered to my abdomen right now. Neulasta: as featured in commercials on MSNBC if you are interested! Anyway, they stick it on you, and then after a short while it starts making warning beeps, and then it jabs you with a needle, which inserts a plastic tube in between itself and your lovely self. Then after 27 hours it spends 45 minutes injecting a small about of medication into you through that previously placed tube.

This medication induces your body to make additional white blood cells, which considerably reduces your chance of getting an infection during chemo. Common side effects of Neulasta include bone pain, especially in the lower back and hips, as the bone marrow there is working hard to make the white blood cells and it might gripe about it. Oh, and it can make your spleen explode. I learned that on MSNBC. (Why do they have those commercials for medications! They have to tell you every bad thing that could possibly happen, which leaves no one wanting to use any of these products ever!) But the chemo tech said that she has never heard of that happening to anyone in real life. Just the pain. Take Tylenol, she said. Take Percocet, she said, since I have some left over from my three surgeries, and they will be happy to refill it if needed. Well, we will see. Perhaps I won’t have the side effects, or perhaps they will be bearable.

But the point of this is to alleviate some of my paranoia about immune system deficiency. “Don’t put your fingers in your mouth,” she said. I had no idea how often I actually do that! She eased some of my concern when she made the comment that germs at home are less of a problem because my body already knows how to deal with those, because with four small dogs and one small child, my house is a germ festival I’m sure!

I still have some anxiety though. I went out yesterday. I had two doctor’s appointments in two different offices. The receptionist (that I didn’t see thankfully) at one of the offices was coughin and hacking. I seriously thought, she should be wearing a mask. There are medically fragile people who visit doctor’s offices and they don’t need the receptionist making them sick. I got a pedicure, and I went to the grocery store, and in every location there were a number of people coughing and sniffling. It seems to be a second flu season! I came home and said I’m never leaving again! Well, okay, I decided if I have to go to the grocery store I am going early in the morning, when it’s less crowded and when the sick people haven’t been able to drag themselves out of bed yet.

One thing I have been missing is church. When my doctor told me to avoid crowded places, I’d asked specifically about church, and he said, “I can’t stop you from living your life, and church is important, but if it was up to me I’d really rather you stayed home.” 😦 😦 😦  Honestly, I have been avoiding it for awhile, first because I was going to have surgery, then because I was recovering from surgery. I actually only got rid of my drains and able to dress presentably last week, and I thought about going last week, and I thought about going this coming week, since my system will be so flush with white blood cell’s from Neulasta, but even a healthy immune system does not keep you from catching a virulent virus. So I am going to stay home until this disease that is making everybody cough has run its course and is out of here. Please someone let me know when flu season is over!

My faith has suffered some without church. I have decided to try to remedy that in part at least with video and audio teachings that are so available on my computer and phone. I have been reading the Bible every single dingle day, but it hasn’t always given me hope. I don’t know if I’ve mentioned this before, but early on I started thinking about the phrase, “There are no atheists in foxholes,” which meant that when it came down to putting your life on the line, people would choose to believe.

For me, it’s kind of been the opposite. There is so much on the line, I feel like I can’t afford to make a mistake, either one way or the other. With every fiber of my being I so want to be certain that there is some higher purpose in my life, that there is someone holding my hand while I walk down this path and guiding me to a safe place. For this to all be due to random chance, for me to be completely powerless and without someone greater on my side, that is scary. God hasn’t been exactly chatty and reassuring lately, but I just keep plodding on and when I can’t exactly believe, I continue to hope.

So that is it. Day One of chemotherapy. Day One of twenty weeks. The fun is just beginning.

2 thoughts on “Thoughts after first day of chemo”

I love the introductory video they show you when you sign up as an artist on Patreon. It points out what a wonderful time we are living in, where artists of all types are free to create and to share their creations with the entire world through the internet and other modern technology. Remember back in the old days, when there were just a few stars in each area of the arts, and you would have to travel to a store and buy their music or writing or artwork if you wanted to enjoy it? Now instead of a few stars there are massive constellations of artists out there, sharing their art on the internet. The only problem, the video goes on to point out, is that nobody is getting paid for it! There are still those few stars making megabucks, and then there are the throngs of writers and musicians, artists and filmmakers, who are just giving it away.

As a writer, my real purpose is to share something meaningful with the world. Perhaps one day I will finish one or both of the books I have in progress, and someone will want to pay me money to publish them. But honestly, I would be just as happy to continue to just share it through the internet, and through self publishing venues that are one of the other blessings available today, if forums such as Patreon can provide the support that my family needs.

I have a couple of levels of thank yous to those who support me on Patreon. At the $10 a month level, I will send a personal thank you, with some items which might include personalized pens, pins, bumper stickers, depending on what I have on hand at the time.

At the $25 a month level, I will send you drafts of the chapters of the book I am working on and give you an opportunity to comment and make suggestions, and will also send you a personally signed copy of any books I may publish, including the child safety book I published a few years ago.

Thank you, thank you so much. For more information, or to make a pledge, please visit Patreon.com/sharonmurch.

And never forget, you are loved.