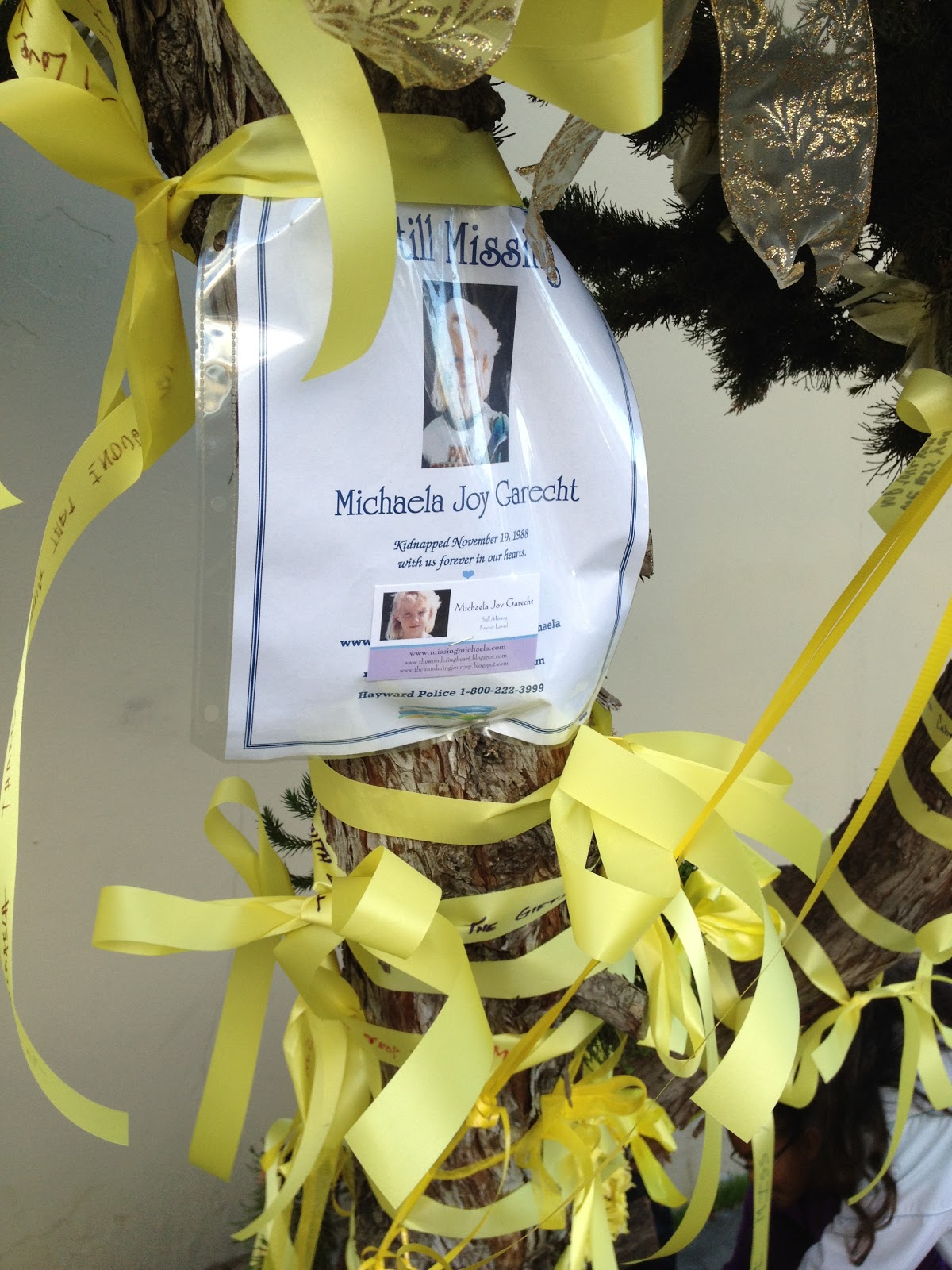 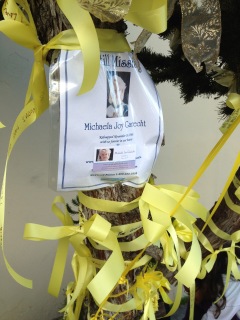 Just a quick check-in here. First I want to report that the work on my book has finally taken off and is going very well. As I have mentioned, it is a novel, the story of a mother with two daughters, the oldest of whom was kidnapped. The older daughter is most definitely Michaela, although she will have a different name, and the information about the kidnapping is fairly true to life. I do this for a couple of reasons. First of all, this story is engraved in my heart and it wants out.  And second, I still keep thinking that somewhere out there, someone, maybe even Michaela, will see that I am looking for her, and perhaps some of the information might ring a bell and result in information that could lead to us finding Michaela. Until she comes home, I must whenever and wherever possible hold that light as high as I can to help her find her way here.

I am now into the fictional part. This revolves around the theme of loss, and yes the younger daughter is inspired by my youngest daughter. Even though she was born five years after Michaela was kidnapped, somehow she was born with that loss engraved on her heart, and it has seemed to impact her actually more than any of my other children. She is almost twenty years old now, and life and her spirit have allowed her to navigate those fears she has had since infancy, and to become a gracious young woman. The character in the book deviates in this regard, as she doesn’t navigate quite so well, and learns these lessons in a way that is a bit more difficult. At any rate, this is my first actual foray into fiction writing, and I am really excited to report that what my writer friends have claimed is actually true! If you just keep writing, your characters come alive and show you where they are going and how. I’ve had this book roughly in my head for years now, have mulled it over without writing it down, and part of what has kept me from diving into it is that I haven’t been able to figure out how this will work, or how to show that, or what the motivation for the other will be, but magically it has actually started to come to life as the words fall onto the page.  This has also been very therapeutic, especially in this month, writing all this down.

I have been getting up every morning at 5:00 to write a couple of hours before work. Mornings are my best time, by far. I tend to be tired in the evenings after work — even more so after getting up two hours early to write, I will admit, but I am always anxious and excited in the mornings to get up and do this. I am doing NaNoWriMo, in which the challenge is to write 50,000 words between November 1st and November 30th, and I am so thankful for this! Honestly, if I wasn’t doing that, I would have stopped weeks ago and said, hey, I’m not sure this is right. I would have gone back and fretted over the beginning and would have rewritten it time and time again rather than just getting on with it and getting the whole story down. These doubts are there, and I know that once I am finished there will be a lot of editing and refining that I will have to do, and I pray for the wisdom and strength to get through that! But in the meantime, this is helping me to get it all down, to get it FINISHED, and that is the first step, and has been the real challenge for me. So thank you, NaNoWriMo for the lesson no writing class could have imparted quite so well.

This Tuesday, the day after tomorrow, will be the 25th anniversary of Michaela’s kidnapping. Honestly, what I want to do is crawl into bed for the day and pull the blanket up over my head. But I have my yellow ribbons, and I am going to go to the store and hang them on the tree again. It will be a small thing. I have posted the event on facebook, but have encouraged people to hang a yellow ribbon for Michaela wherever they are rather than make the drive to Hayward. I have kind of run out of words to say. In the craziness after Jaycee was found, when I was doing interviews from 3:00 in the morning until 9:00 at night and everybody was asking the same questions over and over again, I was so exhausted and I kept wanting to say, umm, can’t you just press rewind? But again, I will just say thank you, thank you all so much for loving Michaela. This year we will have a moment of silence during which we will take that love and focus it directly on Michaela, and hope that wherever she is, she will feel it, and it will give her strength. She might not know it’s us, and she might not know that we are trying to direct her to come home, but perhaps she will just feel a lift in her spirit, a strengthening in her heart.

Okay, I have one more thing to say. I get a constant barrage of complaints from people who over the years do not feel they have received enough attention from the police about the information they believed they had. So first of all, I want to try to paint a picture for everybody of what this investigation has been like. In the very beginning, there were literally HUNDREDS of leads that were pouring in to investigators every single ever loving day. They were completely overwhelmed. The detective at that time told us that they were having to look for a reason to rule out each lead so they could move onto the next. No suspect was completely ruled out unless they were dead or in jail at the time of the kidnapping, but there was so much work to do they could not afford not to keep moving on. It is for this reason that it is believed that the answer to what happens lies in the information that came in during those early days, because there had not been that opportunity to shake things down until the last nut fell out of the tree, so to speak. Our current investigator set out to try to go through much of that information. A room was set up at the police department in which five or six file cabinets held all those leads. He tried to use various helpers to try to first of all get all that information into the computer so it could all be cross-checked. At one point, the National Center for Missing and Exploited Children sent a couple of people out to work on it, but then it seems they changed their minds and decided not to do it. They came for a couple of weeks, worked on it, then left saying they’d be back. A short time later they said, oops, changed our minds. At any rate, it’s a hard, hard job, takes lots and lots of time, because there is so much information to catalog.

As I’ve said a few dozen times, we do also have about five really strong leads in the case that have been culled over the years. The work on following these down to their conclusions is immense also. So this is what the investigators are doing.

There is currently a post making its rounds on facebook that carries a complaint from somebody that they called something in and the police never called them back, and I have started getting lots of messages from people who are concerned that the police are not doing their job. And this is disturbing me.

If you call in a lead, just because the police don’t call you back doesn’t mean that your lead hasn’t been recorded and cataloged within the files and within the investigator’s brains. Remember, there is not really anything police can do with a lot of leads. I’m told that this person has actually taken the time to call this lead in again within the last year, but honestly there isn’t anything the police can do with a lead that says somebody saw a car matching the description parked in a parking lot 25 years ago. Even 25 years ago, the only thing they could have done was stake out that parking lot, and if they had not had any other information and leads maybe they would have been able to do that, but the fact is they were drowning in information. They did actually look at all those lookalikes people called in.  If a name was given, a file was created, and that person was investigated. If you know someone who was in the area at the time who looked like the kidnapper, I’m betting that person was investigated in 1988-1989.  Same with the cars. And yes, the investigators did check with all the wrecking yards for cars matching the description, and all the other brainstorming ideas people come up with these days. They worked their a**es off, people. (Kenny Gross lead Hayward PD investigator and Larry Taylor lead from the FBI, and my gratitude is extended to you both wherever you are today.)  They CARED about Michaela every bit as much as you do, they loved her like their own chld, and they put their hearts and souls into this investigation, as does Rob Lampkin today.  Okay, sometimes today the higher ups in the police department may need a nudge to let loose with the time and resources to continue the investigation. The Hayward PD has this crazy notion that lieutenants should be recycled into different departments frequently, and while they all pretend they think Michaela’s case is important, they don’t all put their money where their mouths are.  If you want to do something, people, rather than brainstorming what the police should have investigated in the beginning, how about barraging the Chief of Police at the Hayward Police Department with letters saying that Michaela’s case should be given priority?  But as far as those investigators who have loved Michaela and made her a central part of their lives over the years and have fought for the investigation and have worked so hard, well, they have my gratitude, my respect, and my love.

This case is perhaps not like many cases, simply because we did have an eyewitness and because the public response was so huge. We have thousands and thousands of leads. Please remember, this is about finding Michaela. I send leads to the investigators all the time. I have to trust them to know whether the leads are of value and whether they need to be followed up, and whether the people who sent them need to be contacted or not. The investigators have a broad view of the case that I don’t have, and they know whether a particular piece of information is something that can be followed up or not. For darn sure, I would rather they spent their time doing that than calling me to let me know they got the lead or what they are doing with it.

Michaela, you need to know the love that has been poured into the investigation to try to find you. It’s not for lack of trying. If we haven’t found you, if anything it’s actually because so many people were trying to help, not because there was not enough help. The world loves you, Michaela, and the investigators love you, really, really love you, and most of all, I love you. Forever.  As long as I’m living, and beyond that.