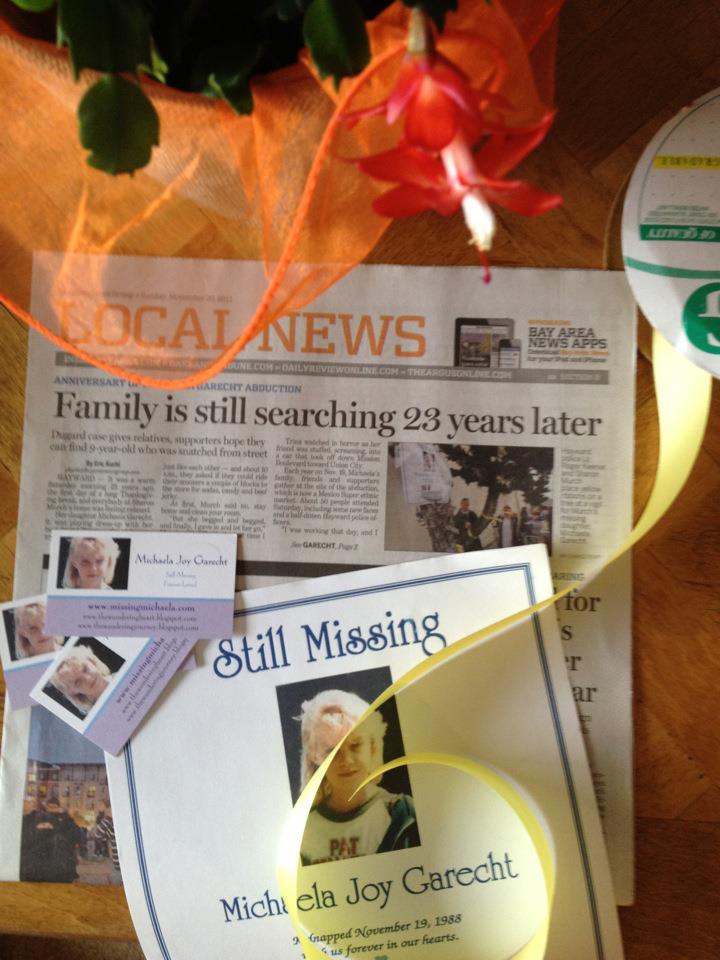 Michaela, here are some photographs of the remembrance that we held for you yesterday. We met at the Rainbow Market (now called Mexico Super) at 10:00 a.m., which is the time that you went up there that Saturday morning 23 years ago. I stand there, in the exact spot where you were kidnapped. It is the most horrible place in the world, and yet it is this also: it is the place where you spent the last happy, carefree moment, before your life was forever changed by some monstrous excuse for a human being who somehow thought he had the right to take you, a child, away from your home and family, from all those who you loved and who loved you. Lord, I cannot even imagine this. And yet it is true.

Many people came — I think I counted about 70. Your family was all there, except for Alex, who lives a distance away and wasn’t able to make it. All your old family, and your new family, sisters and a stepdad you haven’t even met. There were people there from the police department, and Michaela I want you to know that those people really, genuinely care about your case and are working to do everything they can to find you. There were many people there from the public, people I’d never met but who knew your story. There were people there who knew you, and who came to show their love, from the Cabral family, who lived next door to us in the apartments on Berry, to John Spahn (now also known as “the boy in the picture,” since he was standing next to you in my favorite photo of you).

We hung yellow ribbons on that scrubby little bush that we call a tree. It is right at the head of the parking space where the kidnapper parked. People wrote messages to you on the ribbons. If you are anywhere near, you should go and read them. If you are not, I will post photos of them here so you can see them. My friend Kaye Santos, who is the mom of Robbie’s best friend and partner-in-music-making, brought 23 yellow balloons, one for each year that you were gone, and we released them into the sky with all our prayers and best wishes for you.

Robbie sang some songs. One of them was “Please Come Home” by Dustin Kensrue. The lyrics of the song as a whole didn’t apply to you, because it was based on the biblical story of the Prodigal Son, who had taken his inheritance and squandered it on partying, but whose father longed for him to come home and welcomed him with open arms when he did. Robbie sang that one because, of course, we want you to come home, and because we know that there are kids who are missing, kidnap victims and runaways, who are afraid to go home because after all they have done, and that has been done to them, they are ashamed and think they will not be welcomed, will not be loved. I’ve said a thousand time, and will never stop saying, that Michaela there is nothing at all in the whole wide world that could ever, ever, ever make me stop loving you every bit as much as that day I last saw you, an innocent nine-year old child. (And if there are any other kids out there who may be separated from family like this, I’m just telling you that this would be true for you as well, so GO HOME!) And Robbie sang “Somewhere Out There,” a song that you knew well (better than Robbie did … he provided a little lighthearted relief there). Remember, the song from An American Tail, about the little mouse who got separated from his family? And I know you are somewhere, somewhere out there.

Libby was our chief photographer, and took videos, and I hope to post them later. But she likes to sleep most of the day on Sunday. So right now I’m just posting a few photos that I took, or that others took and posted to facebook, so you can see just how much we still, always and forever, love you.

Many of the ribbons that were hung on the tree had messages written to you, Michaela. Here are some of them: 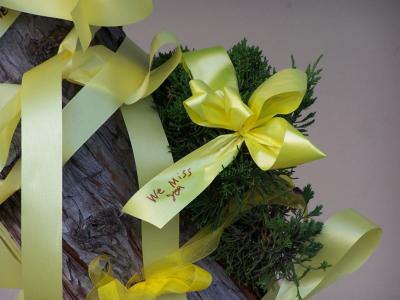 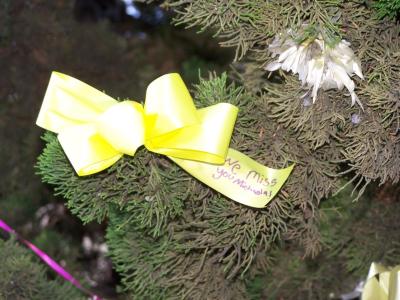 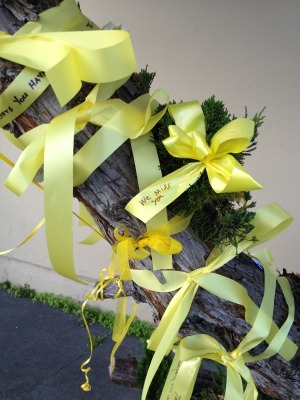 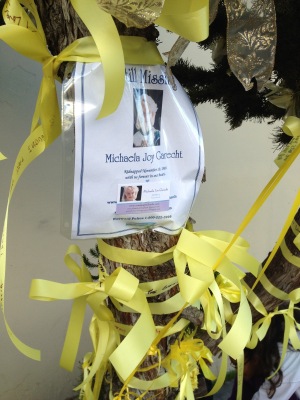 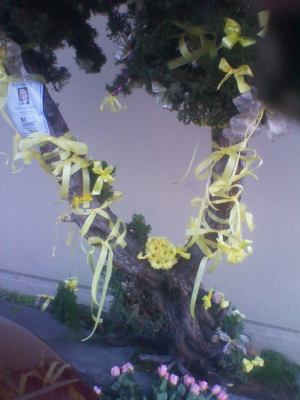 I have to tell you one other story, Michaela. There were many people I spoke to yesterday, but one was a young woman who came and told me the story of her kidnapping in 1991 in Hayward, when she was 13 years old. She was known in the press as Jane Doe, and her kidnapper is now known as the “Holiday Rapist.” He kept her in the back of a van for three days. He was discovered and prosecuted recently by DNA evidence, and though the statute of limitations had run for a number of the crimes he had committed in this incident, he was convicted of felony torture.

This young woman, tiny and petite even now as an adult, came and talked to me. She said she’d wanted to tell me this for a long time, that during the time she was being held prisoner in the back of that van for three days, as terrified as she was, she did not feel alone. She said the first thing that came to her mind was your name, and that somehow you were with her for those three days, helped her to get through that ordeal. Finally, she convinced the kidnapper, who had kept her blindfolded the whole time, let her go.

It’s one story, Michaela, a part of your legacy of light. And I know there will be many more stories in the future.

I love you forever, Michaela.
mom