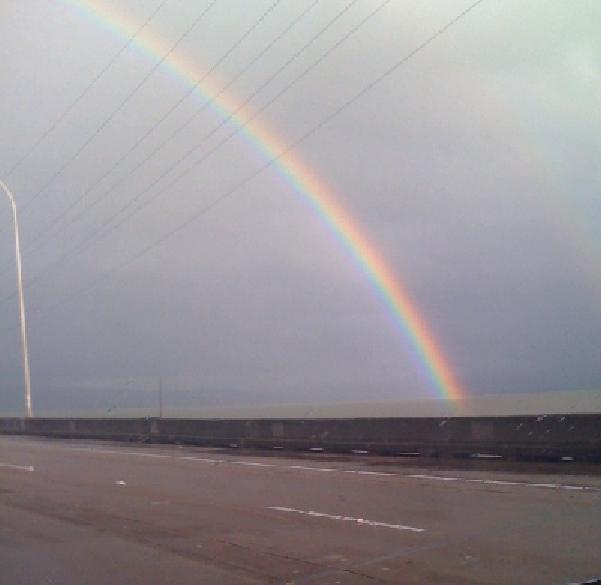 Yesterday I was driving home across the San Mateo Bridge when the most amazing rainbow appeared!  This was a full rainbow, which began in the waters of the Bay on one side of the bridge, spanned over it and disappeared into the waters on the other side of the Bridge.  But what was so remarkable about it was its brilliance.  I have never in my life seen a rainbow that was so brilliant, so vivid, so solid.  The rainbow was set against a backdrop of the deepest gray sky and water, which made it even brighter. I got a few photos, but of course they couldn’t do it justice.  They are only taken with a cell phone, through the windows of the car. 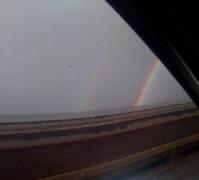 The rainbow was so breathtaking.  I know it was a meteorological phenomenon, and yet when you see something as beautiful as that, there is just this natural inclination to think that it was put there for you somehow, that it was some sort of a sign.

Traditionally, rainbows have been a sign for many things, but for me, rainbows are always associated with you.  Do you remember in the months before you were taken away from me, you were almost obsessed with drawing rainbows?  You drew them in almost every picture.  I remember one in particular where you drew an angel standing underneath a rainbow.  Of course, I believed that angel was you!  So with all that has been going on, that rainbow on that day at that time was like a promise being held out to me, and it was a promise of you.

In my last blog I talked about a woman who thinks she knows where you are, who you are, and she claims that you don’t want to have any contact with your family.  Well, her reasoning seems to be faulty, because she said you have endured so much pain, you just want to move on.  But that pain was the result of being taken away from me, and so I want to say, how could coming home cause you pain?  Yet I have to acknowledge that this could be a difficult thing for you.  On so many level, such deep levels, I know that if you are somewhere and you have made peace with the way you are living now, coming home could just serve to remind you of all that you have missed all along, and perhaps you don’t want to think about those things, perhaps you don’t want to feel those things.  Perhaps you are ashamed because of some of the things you have been forced to endure … but if so, don’t be!  None of what happened was your fault, and there is nothing that could have been done to you, and not even anything you yourself could have done that could make me love you any less!  You are my daughter, my baby.  You are my first child, the one who opened my heart up in the beginning.  I love you forever, and you know that, so remember it and let it be real to you!

Lately, I have been marveling at the state of the ribbons I have tied on my front porch.  I put them there last November, on the anniversary of your kidnapping.  That means they have been there for three and a half months now, and those three and a half months have been full of raging storms!  Trees have fallen, but those ribbons have hung on, and not only have they hung on, they look as clean and fresh and pristine as they did the day I hung them.

Sometimes, they get a little soggy.  I took this photo yesterday,, after days of drenching rains and winds.  The ribbon is soaked and stuck to the railing, but it is intact. 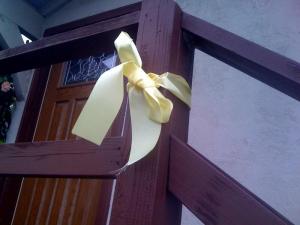 When the rain stops, however, the ribbon just springs right back to life, looking every bit as much as it did on the day I hung it there.

This ribbon is a picture of my love for you.  Not all the time, not all the storms, all the wind and rain, can change it.  The dirt and dust will never settle on it.  It remains just as fresh and clean as it was on that first day when I held you in my arms and looked into your beautiful little face.  You were a miracle then.  You are a miracle now.  You have been given a very hard road to walk in this life, but it is not an aimless journey.  You do have a destination.  You do have a destiny.  And that destiny is one of love and hope and faith.  Many people over the years have somehow taken comfort from me and what I have suffered, and the roads I have walked through that suffering.  How much more will they take comfort from you!  I know all that happened, and yet you have to believe me that you are not a victim.  In your heart, you are a Victor.  I know this.  I know your heart, and its strength and its love, and I know that it may be wounded, but there is nothing that this world could heap on it that could ever, ever destroy it.

Maybe even these things sound a little scary to you, but don’t be scared.  I promise, I will be here for you.  I will hold your hand through every step of the journey you wish, and I also promise that when you want me to (and only when you want me to), I will let go of it also.  Just take that first step.  Come home.